“A positive Attitude causes a chain reaction of positive thoughts, events and outcomes.”
A Positive Attitude helps to cope more easily with the daily affairs of life. It brings optimism into your life, and makes it easier to avoid worry and negative thinking. If you adopt it as a way of life, it will bring constructive changes into your life, and makes them happier, brighter and more successful. With a positive attitude you see the bright side of life, become optimistic and expect the best to happen. It is certainly a state of mind that is well worth developing and strengthening.

- Positive thinking.
- Constructive thinking.
- Creative thinking.
- Expecting success.
- Optimism.
- Motivation to accomplish your goals.
- Being inspired.
- Choosing happiness.
- Not giving up.
- Looking at failure and problems as blessings in disguise.
- Believing in yourself and in your abilities.
- Displaying self-esteem and confidence.
- Looking for solutions.
- Seeing opportunities.

The benefits of a positive attitude:

- Helps achieving goals and attaining success.
- Success achieved faster and more easily.
- More happiness.
- More energy.
- Greater inner power and strength.
- The ability to inspire and motivate yourself and others.
- Fewer difficulties encountered along the way.
- The ability to surmount any difficulty.
- Life smiles at you.
- People respect you.

If you have been exhibiting a negative attitude and expecting failure and difficulties, it is now the time to change the way you think. It is time to get rid of negative thoughts and behavior and lead a happy and successful life. Why not start today? If you have tried and failed, it only means that you have not tried enough.

Developing a positive attitude that will lead you to happiness and success:

- Choose to be happy.
- Look at the bright side of life.
- Choose to be and stay optimistic.
- Find reasons to smile more often.
- Have faith in yourself and in the Power of the Universe.
- Contemplate upon the futility of negative thinking and worries.
- Associate yourself with happy people.
- Read inspiring stories.
- Read inspiring quotes.
- Repeat affirmations that inspire and motivate you.
- Visualize only what you want to happen.
- Learn to master your thoughts.
- Learn concentration and meditation.

Following even only one of the above suggestions, will bring more light into your life!

Positive thoughts will lead you to financial success and it will help you find the true riches of life for yourself and your family. So whatever it is in life that you want, you must begin today to become a “positive thinker.” Once you do this your future success will be unlimited.

See below for some phenomenal books to help you develop an unstoppable positive attitude.

Wishing you a very Positive Day!!

Last weekend, we returned home from our company’s Top Producer’s trip to The ‘luxurious’ Broodmoor Resort in Colorado Springs. It was SO beautiful, hard to put into words actually!! So I threw together a share site on Shutterfly to show you!  Go to Colorado Top Producer’s Trip 2010 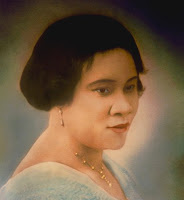 This article was sent to me recently by my mentor and I just fell in love with it. What an amazing story to really put life, hardships and how we face them into perspective. Hope you enjoy! ~Kristie

Her name is Madam C.J. Walker and that is her picture. And let me tell you, this lady ..how she became the first female self made millionaire selling hair products door-to-door! Check out her story. Here is her information… she was born in Louisiana. On a farm. In 1865. Not really an ideal time and place to be born if you’re: A woman. African American.
But she had plenty of additional challenges to face.

She was an orphan at age seven.

At age 14, she got married …reportedly to escape the abuse that she was suffering at the hands of her brother-in-law.

She supported herself and her daughter by picking cotton on a farm, by being a laundress, and by working in a barber shop. From what I can tell, the most she ever made during that time was $1.50 a day.

But It Got Worse

At around 25 years old, she began to develop a a condition that caused her to start balding.

Can you imagine? As if she didn’t have enough to deal with …now the poor lady’s hair is falling out.

(And we whine when our cell phone drops a call every now and then… kind of embarrassing.)

Anyway …Here’s Where It Gets Good

It shouldn’t surprise you that she quickly became a student of “how to fix the balding problem”.

In fact, she researched all kinds of treatments, and eventually discovered that sulfur could abolish the scalp disease that was causing people to lose their hair.

(Apparently, people lost their hair a lot back then because they didn’t bathe as much. They would get some nasty scalp infection and their hair would fall out. But if you treated the problem with sulfur, you could knock it out.)

So she did the only logical thing to do, which was to start her own business …selling a product called “Madam Walker’s Wonderful Hair Grower”.

Keep in mind, she was just starting out and didn’t have a big budget (probably NO budget at all) so she had no choice but to …Go Out thre and take charge!

And the first thing she did was to go door to door, selling her product.

Listen – nobody really embraces a door to door sales person with open arms these days, you know?

But imagine what it must have been like for Madam Walker in the racist and male dominated environment she was working in back then.

…That took some cojones.

How many times do you think she was rejected?

How many doors do you think were slammed in her face?

How many insults did she hear?

I’m willing to bet she even was threatened …regularly.

But did that stop her?

Not only did she survive …she thrived.

Mrs Walker hung in there and sold more products, developed new ones, and finally opened up a factory in Indianapolis.

By 1913, she was traveling around the world training other women to sell her products.

Against incredible odds, wouldn’t you say?

Did I mention that her parents were former slaves? I don’t think I did.

So her story is amazing, and I think her success is largely due to one critical characteristic:

The Amazing Ability To Get up AND Get To WORK.

Seems we have a lack of that ability these days.

The real secret to success is to get out there and work like crazy.

And when we think about Madam C.J. Walker, it’s painfully obvious that …

We Have Absolutely NO Excuse For Failure

Actually – let me rephrase that.

In the beginning, failure is pretty much inevitable.

A first-time home run is about as rare as an honest politician.

And some projects don’t work at all. Such is life.

So yeah, failure is OK.

But here’s the thing,

You Have To Get Up, Brush Yourself Off, And Get Back In The Game

That is the magic power of the successful entrepreneur.

Actually, there are really only two magic powers that I’ve seen – and these are present in every successful person I’ve met, worked with/for, or studied.

Magic Power #1: The ability to get started.

This is a big one.

I’ve seen so many people get stuck on trying to figure out what web host to use, what script to use, what email provider, and so forth.

And look – I’ve been there, so I can relate.

But here’s the deal.

So let me help you out here and tell you right up front that …All That Bad Stuff Is GUARANTEED To Happen!

Your friends will certainly judge you and talk behind your back about what a fool you are for trying to make money on the Internet. At least one of them will believe you’ve fallen for a get-rich-quick scheme.

And since you’ll be putting yourself out there in the interwebz for the whole world to see …you’re probably going to look not so great to someone. (And if you don’t, you’re doing it wrong.)

And since you know it’s all definitely going to happen (barring some miracle), you can finally stop worrying about it and just get it all out of the way!

Better to go on ahead and power through it, you know? Hurry up so you can get to the good stuff. Like cramming down the vegetables when you were a kid so you could finally get dessert. (I still do this).

And once you do …you can practice

Magic Power #2: The Ability To Step Back Into The Ring

Business is like boxing in the sense that you will, without question, get knocked around a little.

Know what I mean? And do you think there’s ever a conversation where a guy wants to become a boxer and this happens?

Coach: “That’s great. We can start training on Monday.”

guy: “Do you think I’ll ever get …you know …hit? Like, do you think anyone is gonna …you know, punch me?”

I know, I know …never happens. In BOXING.

But it sure happens in business.

People get started (which is a huge feat in and of itself) and then just get floored by the first setback.

It takes them by complete surprise and it makes them want to quit.

But what’s not natural …and what really breeds success …is that ability to brush yourself off and start over.

Just like the champion boxer, you gotta get up and step back into the ring. If you do that enough times, you’ll be tough as a pit bull and you’ll start winning.

And it doesn’t take too many wins before it all starts to add up.

But, if you don’t get back in there and take another shot …you’ll never win.

And listen: EVERYBODY I know who’s achieved lasting success has, often on more than one occasion, has fallen down in their business. Many have lost everything before they finally “made it”.

Ive fallen many times and embarrassed myself but you know, I always got back up and stepped into the ring again. Was it hard? YES!

And if an orphaned daughter of former slaves can work her way up through the racist hardship of the economically depressed deep south …and become the world’s first self-made female millionaire …then what possible excuse do WE have?

Do you think it was easy for this lady to just walk outside and start going door to door? no!

Do you think it was easy for her to keep going after hearing insults and rejections every day? Of course not.

But she did it anyway. Because that’s what it takes.

Now get out there and take what’s yours.

Note: Special thanks to C.J. Walker’s great granddaughter, A’Lelia Bundles, for sharing her writings with the world at www.madamcjwalker.com. …And for giving bloggers permission to reference her work.