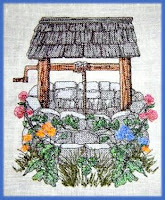 The Wishing Well
by Anthony Fernando

On top of a hill overlooking a babbling brook stood a dilapidated stone well. The wooden frame which had once been used to raise water was broken and a discarded bucket sat on the ground nearby. The only thing that made this old well special was a small tarnished plaque that carried a three word inscription which read ‘The Wishing Well’.

One morning a young man named Richard came upon the well and read the small plaque. Richard was a cynical young man and he scoffed at the idea of a wishing well. However, he was also very greedy so he closed his eyes and wished for a large pot of gold just in case. He opened his eyes and looked around but nothing had changed.

As he prepared to leave, Richard happened to glance down into the well and to his amazement he saw a huge pot of gold floating at the bottom of the well. He immediately tried to reach down into the well but he could not reach the gold.

Next he tried to use a piece of wood to retrieve the gold but again he had no luck. After many frustrating attempts, Richard finally gave up. He cursed the wishing well and walked away. Instantly the pot of gold disappeared.

The following day a young man named William came across the well and he too read the small plaque that identified it as ‘The Wishing Well’. What William wanted more than anything else that morning was an engagement ring so that he could propose to his sweetheart Rebecca. He closed his eyes and made his wish. At first he saw nothing, but then as he glanced down into the well he saw the most beautiful diamond ring floating in an ebony box at the bottom of the well.  Like Richard, William first tried to reach down into the well and then tried to use a nearby piece of wood – all to no avail.

After a great deal of frustration, he sat back and reviewed his situation. Then suddenly, in a flash of inspiration he knew what he had to do. He picked up the old bucket and walked down to the babbling brook at the base of the hill. After filling the bucket with water, he walked back up the hill and poured the water into the well. To his delight, he noticed that the level of the water in the well rose ever so slightly.

With a hint of success to spur him on, William began transferring bucket loads of water from the brook to the well. He worked steadily all day carrying buckets of water up to the wishing well. With each bucket of water he poured into the well, the ring floated closer to the surface. Finally as the sun was beginning to set, William poured in another bucket of water and the ring came within his reach. He grasped the stunning diamond ring and with a spring in his step he set off to propose to his Rebecca.

The best part about this story is that the Wishing Well really does exist and is available to each and every one of us. Whenever you set a goal, your objective instantly becomes a ‘possibility’. It is as though it appears in the bottom of the wishing well. You can see it, but it is beyond your reach. Many people like Richard look for a quick and easy way to reach their goal but they inevitably get frustrated and walk away.

Those who achieve true success understand how life’s Wishing Well works. Like William, they recognize that they must put in the time and effort to fill their well before they can collect their prize.

Today I’d like to encourage you to decide what you really want from life’s wishing well and commit yourself to the process of filling your well in order to transform your dreams into reality.

9 thoughts on “A Little Inspiration for You Today – Well Worth the Read!!”