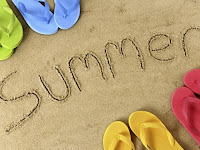 School is out, the kids are home, moms are busy! But that doesn’t mean that our home business stops. People still need what we’re offering and people still need to earn an income, including ourselves. So the show must go on. It may be a challenge but it is absolutely NOT impossible!I have a seven and a ten year old and they just started summer break last week. It’s been exciting to say the least. But I’m still working and getting them back into the swing of “Mommy works from home.” Although things are hectic and not as quiet as it is when they are in school, I still always excel in my business during the summers. Actually when I go back and look at each summer of my business since 2006, they have been my most productive and successful months!In the summer of 2006, I was fairly new, I started in May 2006. I was a SAHM mom at the time and I worked my business around the kids, they were two and five. I would make my calls when my two year old was napping and my five year old was watching a movie. It really doesn’t take THAT much time to get those 3-5 presentations in. If you work this business smart and focus on the work that gets results, which is talking to new prospects, you CAN be successful on part time hours around the kids. It’s all about working it smart. Then before and after nap time, I would answer emails or post ads just around my life whenever I had time throughout the day. Doing those things consistently day after day helped me to have a very successful summer. I hit my first promotion that June and ended the summer with over 40 new team members.

In the summer of 2007, my summer was actually very different than the previous one. In early 2007, I went through a divorce and had to get a full time job outside of the home. When I filed for divorce, I had already reached some success with my business. I had hit my second promotion and had built over $1,000 a month in residual income. But it just wasn’t enough yet to support my kids and I on my own. I knew it eventually would be but in the meantime I needed a job while I was building. So I found myself back in the cubicle. But instead of letting that discourage me and slow me down, it fueled me and I went FULL FORCE. So that summer, my kids were in daycare. I didn’t have to worry about making calls at nap times, I made my calls on my lunch break. What I realized during that time of making calls in the Florida heat in my car is that I really missed being at home dealing with making calls around my kids. So I learned to be grateful for that time with them instead of stressing about it. All those calls from my car paid off, by the end of that summer, I hit my third promotion and built an incredible foundation toward firing my boss.

In the summer of 2008, my summer went back to normal. All that hard work I did in 2007, paid off. I fired my boss and was home full time again with my kids. We had our our life back and we loved it. But I was still on a mission to reach 50k in annual residual income. So the kids and I made a plan, we set a schedule and stuck to it. They knew that WE were working on a goal together and that goal was 50k. That 50k was not only going to allow me to STAY home with them, it was going to allow us to get back to the lifestyle we were used to. It was going to give us more freedom. So that summer, we went on a mission. By the end of the summer, I did hit 50k!

In the summer of 2009, our life turned upside down. Earlier that year, we found out that my little sister, Dawn, only 28 years old, had terminal cancer. That summer, we spent most of our time at hospice spending her final days with her. I still worked my business part time around all of it and continued to enroll people weekly. But I did cut my hours drastically. These were days and hours I was not going to get back. I can remember a few times when Dawn was sleeping, that I went outside and made a few presentations here and there. I worked my business around my family. The beautiful thing about this is that even though I did go part time, my 50k income was still there. My check still came every month, my check still grew. What I had worked so hard for in the previous years allowed me complete flexibility to spend time with my sister. My sister passed at the end of that summer. Although it was THE most heartbreaking experience I have ever endured, I’m grateful I could be there for her. Grateful that I didn’t have to miss those days with her because I had a boss and was stuck in a cubicle.

In the summer of 2010, since the previous summer was so hard on my family, we set a goal to have FUN that summer. We had lots of waterpark and beach days, we did all kinds of fun stuff. And that’s the plan for this summer too! If you notice, summer of 2006 compared to today is a lot different. I worked hard my first two summers, made sacrifices, but look where you get with those temporary sacrifices, you get to freedom. That’s what we’re working for here. And while I do have freedom now, I still LOVE my business and still will continue delivering on MY promise to help each and everyone of our team members that work with us, be successful and reach the same level of freedom. So I WILL be working this summer around my fun time with my kids. I will still touch my business for a few hours everyday.

Now I know that when you have kids at home with you during the summer that it can be challenging. But if you start your day with the right attitude that you are just going to go with it and make it happen, you can get it done without stress, without having to yell at your kids all day. I personally try to wake up before them, get my coffee, answer some emails and then I start my to-do list. That to-do list saves me every time. It’s SO easy to get distracted with all the “Mommy, I’m thirsty”, “Mommy, Brittani looked at me.” But each time I walk away from my desk and come back to it after I’m done taking care of them, I can look back at my list and get back on track very easily.

Moral of my story, the summer months can still be incredible months. I know in this industry you will hear people say that the summer months are slow. But the fact is, it will be as slow or as fast as you make it!  Make a choice to continue to work it hard and consistently everyday! You will be so happy that you did!